The lab machines have the latest version of Windows 10.

Please note that c:/ drive is a very fast SSD hard drive with all the software you need installed. Please keep all data that you need for your projects and classes on the second d:/ or e:/ drive.

We do not want to run out of room on c:/ as the software takes up a lot of space.

Remember to login with your LSU Credentials, your CCT password does not work. Login using the regular microsoft login and your user name WITHOUT @lsu.edu.\n\nPlease remember to back up and remove all software from All the internal drives as they will get wiped for complete re-imaging when we update all the software. Box is a good place to store all of your files when you are on break. 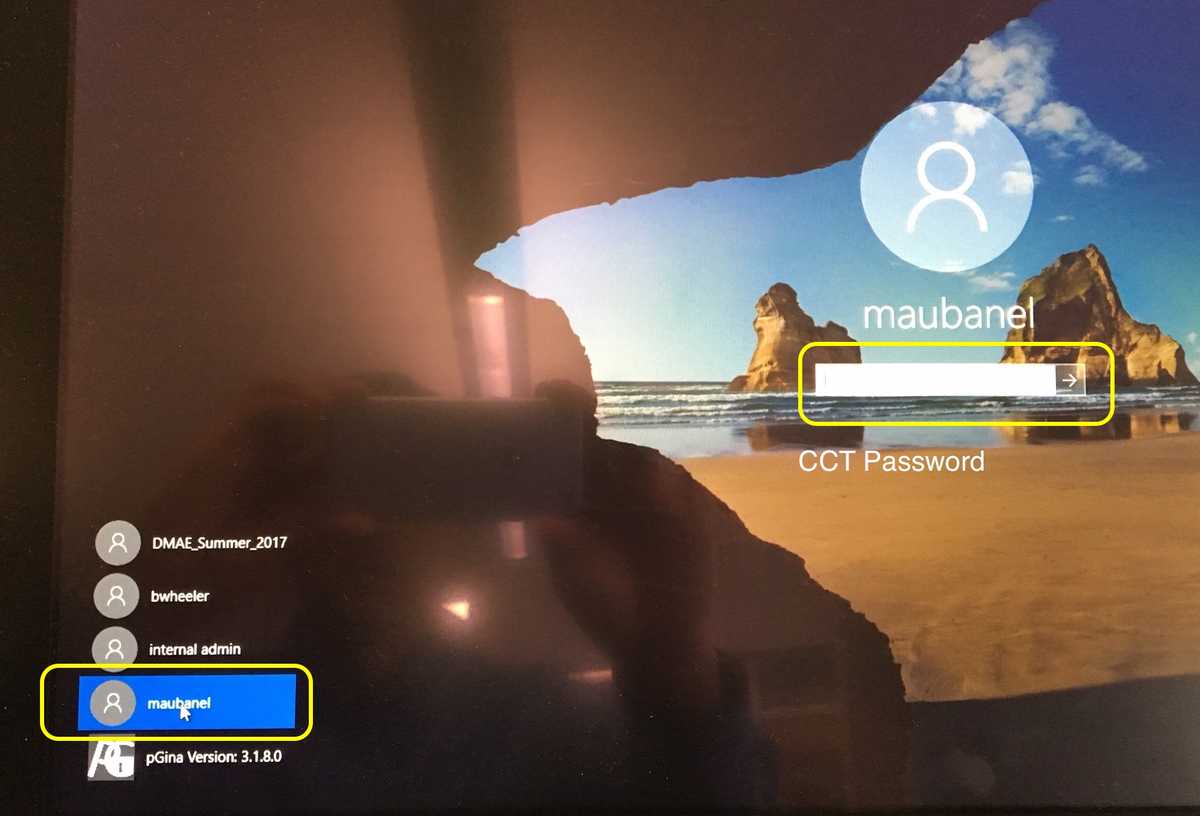 We have one lab account that can be used with the Oculus Rift in the Oculus store and Vive with Steam. For login information go to dmae github link

All software in the lab except for Adobe products can be installed and accessed off campus. For software that requires a license server you will need to be on campus within the intranet or access it outside of campus through Global Protect VPN.

A full description of the process is available in the links below. For Adobe products consider purchasing a student license for the duration of the studies if you find that you need it outside of the lab.

To store large files it is best to use Box at LSU. You can access it from the lab and at home and allows for offline or only online storage. If you cannot log into LSU Box with your LSU credentials, get a free account online at box.com.

If you want to use box without the browser you can download their app for windows or mac at on box.com.

We have access to Pluralsite and Gnomon for their amazing tutorials. Login information can be found at dmae github link.

We also have access to professional music and sound effects from alibi which includes multi-tracks! This can also be found at dmae github link.

If you don't have access to this link then request permission by emailing Marc Aubanel at maubanel@cct.lsu.edu.\n

Which One to Use?

Students have access to using GitHub or with GitLab.

GitLab is hosted on LSU servers and uses Git at its core. The advantage of GitLab is that we can configure the repository in any way we like. We can also control size limits for files that we cannot control with GitHub. But, we do have to maintain it ourselves and there may be fewer gui tools to use with it (I have had varying success using GitHub Desktop in the past). Our implementation is set to go with LFS. 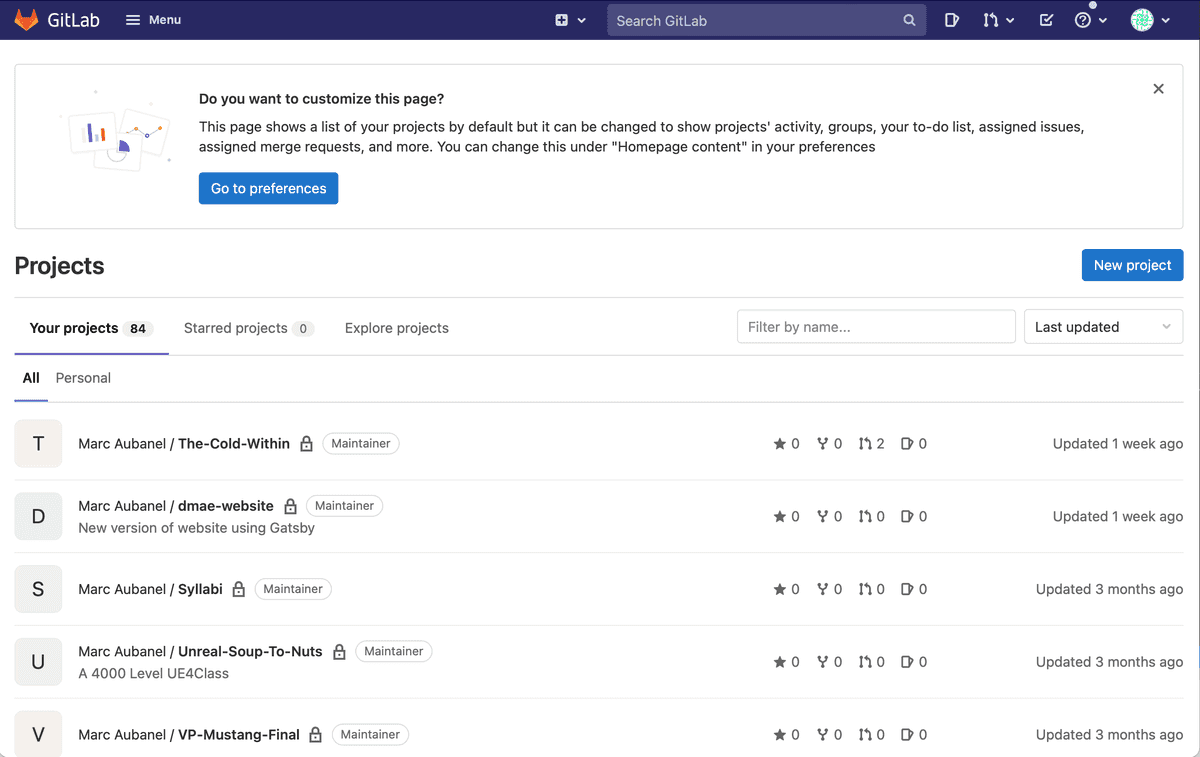 GitHub uses Git at its core and is effectively the same as GitLab. It has its own implementation of lots of tool support and documentation. We do get free LFS support if you launch the project through our GitHub Classroom. Do not start a new project with your own account as there is a limit to where they will charge for further usage (for a 3-D video game project this is suprisingly quick). There are some total project and file maximum sizes that we cannot control. If your project is north of 6 gigs I would consider using GitLab. 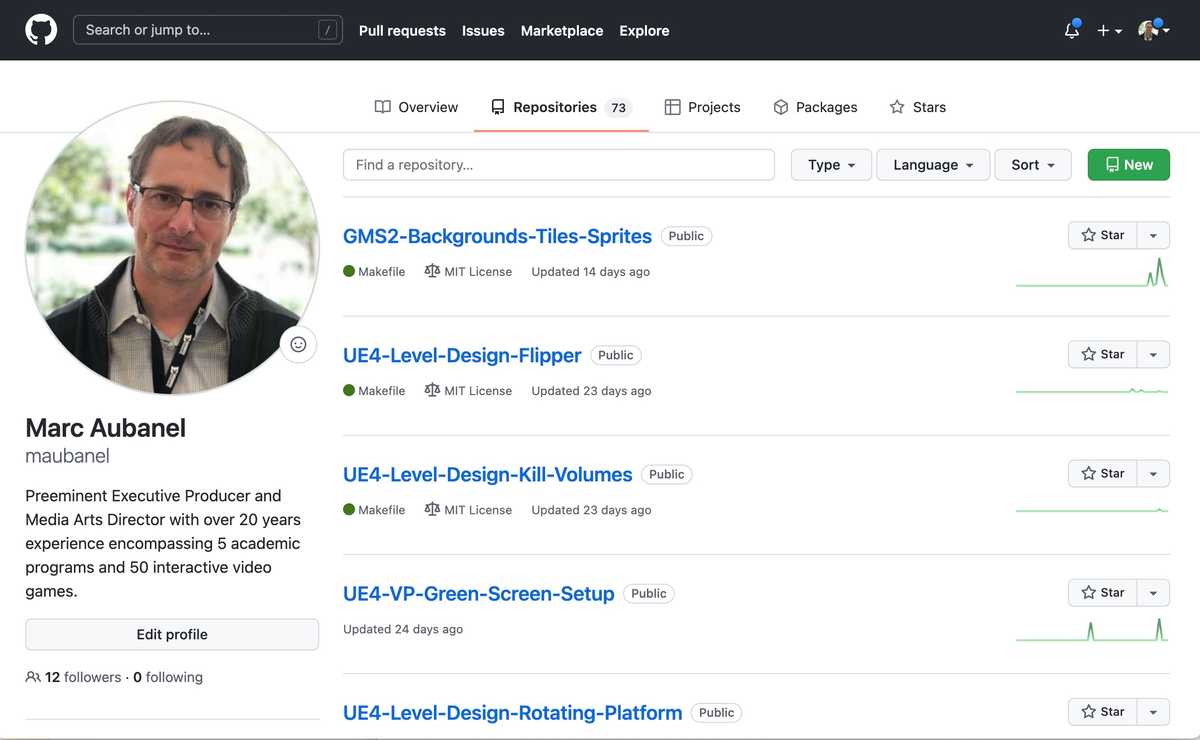 When making a project using large files like 3-D textures, 3-d models, audio samples, videos, large photos or any other large assets it is necessary to use Git LFS. LFS stands for Large File System.

Why do we need Git LFS? In the default use of Git the entire history is stored locally in the .git folder in your main project folder. This makes switching branches really fast as it doesn't need to go to the server to download different versions of files. The problem comes for large files.

Lets say we have a model we are working on and its textures are uncompressed 4K .png files. They total to 100 mb each. Every time you upload a new version of them they are save to your project history in the .git folder. So lets say you have iterated on these 20 times during development. Well now we are talking about 2 gigs of total files that are stored locally. The slows down the entire team's push and pulls and makes cloning new projects arduously long.

LFS allows you to indicate which files we want to use the large file system with and those files only store the latest version locally and the history is stored on the server and you can still recover by downloading them at any time.

The .gitignore file lies in your root folder in the same directory as your .uproject file. If you do not locate it in this folder it will not point to the correct directories.

I recommend you use the ue4 .gitgonre hosted on GitHub. If you use the one generated by the UE4 Engine it is missing the build data for maps (which are generated and VERY LARGE) *_BuiltData.uasset files. It is important that it includes all files that are built locally for your operating system and GPU. This indicates all the files that will not go to version control that get built locally dynamically anytime the file is missing. Without a properly configured .gitignore your project size will grow out of control within a few commits and pushes.

Working files used on the project such as .maya, that are used to create objects but don't get ingested into the game engine - as you would export from that file a .fbx. These should not be stored in Git even using LFS as it will balloon project size and collaboration isn't always necessary. For safety store them on Box so that you have a backup in case your hard drive corrupts or the data is locally inaccessible. 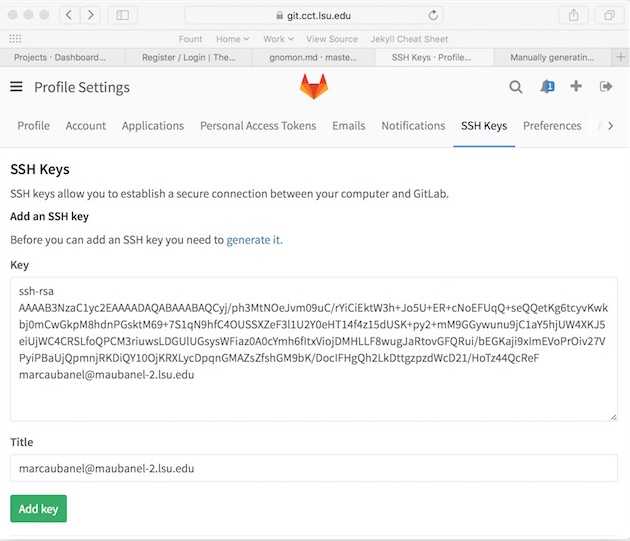 If you are tired of entering your SSH password everytime in Git Bash or GitHub if you are using ssh every time you pull or push the repository, you can set it up so it remembers the password until you log off or reboot.

Open Git Bash and go to the directory with the repository you want to use. Type

On a mac just open up Terminal. You do not need to enter the above command.

The last step is to type:

If you are working in a team that is using both mac and PC's, you will get a lot of git erros regarding line endings. PC's and mac's use different symbols to represent a new line.

Since Unix/Mac OSX and Windows have different line endings, it is good to make sure that the database doesn't update every time a different os is used. Git defaults to this being an unresolved conflict. For more detailed information go to github help.

On Windows you need to enter:

There are two ways of starting a new project on your computer. You will either clone an existing repository or create one from scratch.

If the repository already exists you just need to clone it. Create a **GIT** repository you need to clone a git repository by cutting and paste project site from either [GitLab](http://git.cct.lsu.edu) or [GitHub](https://github.com )and replace above git@git.cct link with the one of the desired project. Please note that this will create a new directory with the one used for the project.

If you already have a folder for it you can create the project inside an empty folder of an eexisting directory using:

Creating a Project from Scratch

The first thing we should always do is get the latest information from the server to make sure that nothing that anyone else has worked on has affected our work:

Get Branches from Server

Deleted on Server but Changed Locally

Ammend To a Commit

Sometimes not all work is worth saving. You often try something out to decide that you do not want to pursue this task anymore.\nFor a single file or two you can just checkout from the previous commit. This is not saved or tracked so use sparingly. You will lose this work though and it won't be tracked. So say you want to revert to your last commit on file1.txt you would type: git checkout file1.txt . To do this accross multiple files you can use git checkout ..

git reset --hard to remove all work in commit locally

git reset HEAD -- . _takes all files that were staged with git add and undoes the staging

If you want to clean up stray files that you don't want to add you can use. git clean -n to preview changes git clean -f to remove stray files

Clean up Files Added to .gitignore

Sometimes when git merges, it ends up sending you to the VI editor to record a message. If so the commands are:

The deadline for the Master's Application For Degree is January 27th, 2023. Please fill this out before the deadline.

You also need to demonstrate your work over the last two years with a portfolio presentaiton as your final exam. The deadline for holding the final exam is April 26th, 2023. Plan for a 30 - 45 minute presentation leaving 15 minutes for questions.

You will need to put together a three person panel for the 90 minute final exam (the panel needs time after to discuss). You can pick any of the faculty that you have worked with either directly or indirectly (as long as they know your work well). Typically students pick Derick Ostrenko and Jason Jamerson as their other two panel members. You will also have to coordinate a time that works for all parties. The choice is up to you. Please email maubanel@lsu.edu your committee member choices.